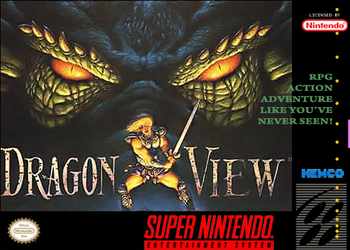 Dragon View (also known as Drakkhen II or Super Drakkhen) is a video game developed and published by Kemco for the Super Nintendo Entertainment System in November 1994.
Advertisement:

Although it bears little resemblance to its predecessor, Drakkhen, it utilizes the same pseudo-3D overworld system for which the series is most famous. Other features of Dragon View are its side-view Action RPG hybrid gameplay (used when exploring more detailed areas such as towns and dungeons), its well-translated second-person storyline, and its emphasis on player-driven "free" exploration.

was done by "My Name Is Kaz". Others include ones done by Lantis02