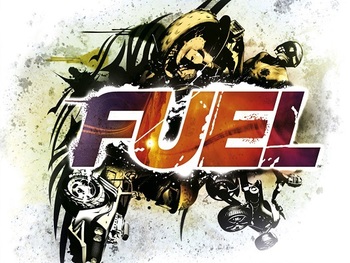 "These were once fertile lands... until weather waged war on man. The seas rose, the sun scorched the Earth, and the people fled... Some... remained behind."
— Opening sequence

Al Gore was right, and Global Warming hit the Earth. The massive climate shift leaves most of the world desolated, with mankind holed up in small pockets of habitable land. So, what do we do with a completely deserted continent? Let's race!

This game was produced in 2009 by Asobo Studio and published by Codemasters. It features a 5000 square mile map, of which you explore to find challenges and race on to gain Fuel, which you then trade in for better, faster, and stronger vehicles.

Oh, and while you race, you get to deal with rapidly changing weather, which can literally rain on your parade across the wilderness.

The game was not well-received due to some dubious handling models for the road cars in particular, as well as the fact that the giant map is procedurally-generated except for some key spots, meaning there is nothing but generic terrain and roads that look like one another as far as the eye can see.