Literature / Battle Is An Art 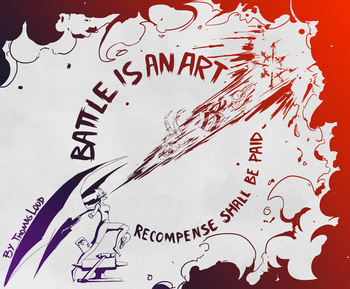 Recompense is essentially a way for me to entertain myself.
Recompense Shall Be Paid
Battle is an Art

is a web serial by Thomas Loud that follows Herah, a human-dragon hybrid that can turn her art into reality and breath fire.
Advertisement:

Battle is an Art focuses on a young Cendreux by the name of Herah, who is forced into an event called Recompense that is meant to be a twisted repayment to her Maker Norwe, a God-like entity that seeks to be entertained by watching over Recompense. To spice things up, the losers of Recompense get their universe destroyed while the winner(s) gets a wish from Norwe.

The serial began some time in February 2018, is still being written, and is currently in its first arc.

Spoiler Warning: A few tropes might get over key details in the story, you have been warned.