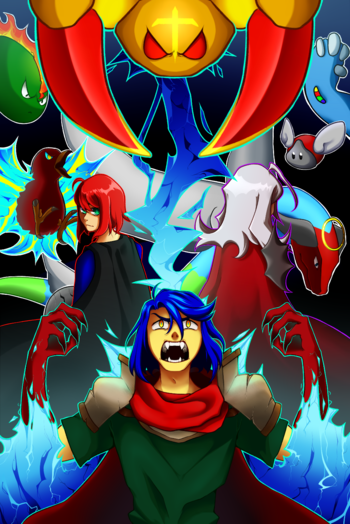 Xander the Monster Morpher is a 2019 PC/Mobile Bullet Hell Mon game created by Karatkuro. Xander, a once human boy, wakes up one day in the form of a big blue frog, and soon finds out that he can transform into any other monster he meets. He quickly sets off for adventure on the behest of a mysterious voice he heard in his head while unconscious...

...After freeloading at the local inn for a month, of course.

Xander the Monster Morpher's gameplay involves shooting monsters, getting experience points to level up your own monster forms, and fusing your monsters together to create new, custom monster forms unavailable anywhere else. Alongside the shooting gameplay, there are also various minigames peppered around the game's world, including fishing and a monster arena focused on catching monsters as fast as possible.