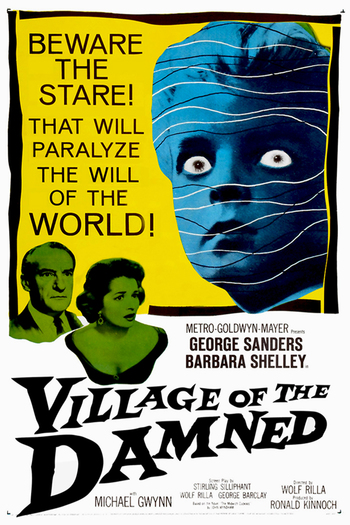 Village of the Damned is a 1960 British Sci-Fi Horror film by German director Wolf Rilla, starring George Sanders and adapted fairly faithfully from the John Wyndham novel The Midwich Cuckoos.

The tale begins as every inhabitant of the English village of Midwich, even the animals, suddenly falls unconscious, as does anyone entering the village. The military establishes a cordon around the village, plus a five-mile exclusion zone for aircraft after the pilot of a plane passing overhead falls unconscious, causing the plane to crash. Nobody can enter the village to find the cause... but when everyone in Midwich wakes again, apparently unaffected by what is soon dubbed a "time out," the danger appears to have passed.

However, two months later, all women and girls of child-bearing age are discovered to be pregnant. All the women give birth on the same day, to strangely identical children, all possessing white-blond hair, striking eyes, and unusual fingernails. As the children grow and develop at a surprising rate, it becomes clear that they share a telepathic bond: what one knows, the others soon know also. And Midwich was not the only community so affected: communities in Australia, Canada, Irkutsk, and the Soviet Union have all seen such births.

However, there is something about these children — these intelligent, well-behaved children — that frightens the adults of Midwich. They show no conscience or love, and can use their mental powers to read minds and force people to do things against their will, even kill themselves.

Now the real question is this: What do they want?

Followed by the sequel/reboot Children of the Damned in 1963, and a 1995 remake directed by John Carpenter.

Village of the Damned contains examples of:

Alternative Title(s): Children Of The Damned