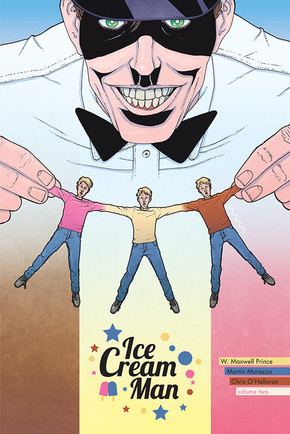 Ice Cream Man is an ongoing surreal horror/fantasy comic published by Image Comics as of January 2018. It is written by W. Maxwell Prince and illustrated by Martin Morazzo.

The series takes on an anthology format and follows different characters each issue as they come into contact with a strange being known as Rick the ice cream man. From there their lives all take a turn (usually for the worst) as the ice cream man toys with reality and spreads human suffering wherever he can. Needless to say, this is one series you'll want to skip if you ever plan on enjoying ice cream the same way again...

There is a companion six-issue mini series called Haha with the final issue crossing over by telling the origin story of Happy Hank who first appeared in Ice Cream Man #8.