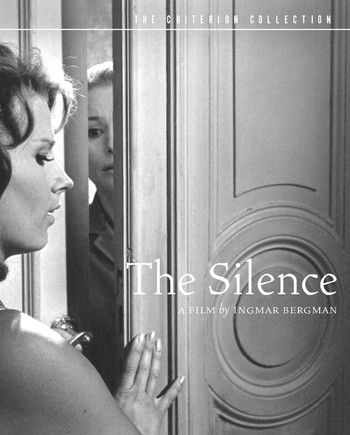 Tystnaden (The Silence) is a 1963 film by Ingmar Bergman featuring his household stars Ingrid Thulin and Gunnel Lindblom as sisters Ester and Anna, with Jörgen Lindström as Anna's son Johan, who is the point-of-view character for much of the film.
Advertisement:

The three relatives are returning home from a summer holiday by night train, but Ester is seriously ill, so they stop at Timoka, a Central European town in an unnamed nation implied to be on the brink of war, despite neither of them speaking the local language. The sexually active, free-spirited Anna is uninterested in ministering to Ester and instead goes into town, where she hooks up with a cafe waiter, while Johan is left with his aunt, who makes awkward attempts to bond with him. Anna later tells Ester that she resents her attempts to impose her morality on her, despite Ester's pleas that she was acting out of sisterly love. The next morning, Anna and Johan board another train home while Ester, whose health has deteriorated rapidly, is left behind to die.