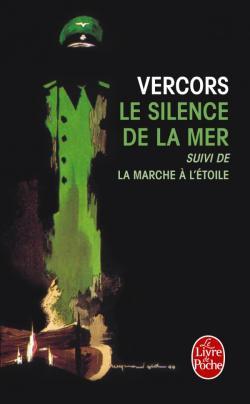 Le Silence de la mer (The Silence of the Sea) is a French novella written in 1942 by Jean Bruller and published secretly under his pseudonym, "Vercors". Which is just as well, as it quickly became a symbol of mental resistance against the German occupation.

The story centres on an elderly man and his young niece, who are forced to share their home with a German officer named Werner Von Ebrannac, and though they are unable to hinder him directly, they resolve to show resistance by never saying a word to him. The uncomfortable arrangement is complicated by the fact that Werner is a polite Francophile who genuinely desires amity with his unwilling hosts and between their two warring nations.

A 1946 English TV adaptation was one of the first programmes broadcast by the BBC after the end of World War II. The book has also been adapted into several stage plays as well as two French-language films — one of them is Jean-Pierre Melville's feature-length debut released in 1949 and starring Howard Vernon, Nicole Stéphane and Jean-Marie Robain, the other is a 2004 TV film starring Julie Delarme, Thomas Jouannet and Michel Galabru. In the 2004 adaptation, the niece becomes a granddaughter called Jeanne Larosière and the uncle a grandfather called André Larosière.

See also Suite Française, a novel written around the same time with similar themes and situations.