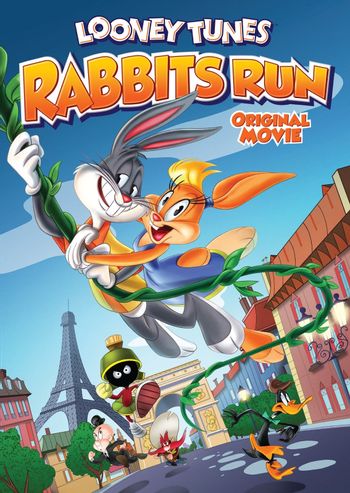 Looney Tunes: Rabbits Run, a Direct to Video feature released in 2015, is a comic adventure that sends the characters on a wild chase in the tradition of It's a Mad, Mad, Mad, Mad World.

Lola Bunny is a perfume salesperson who wants to create "the world's most beautiful fragrance". Her dream comes true when she uses the Flora Occulta, a rare flower gifted to her by her landlord, Speedy Gonzales, as the key ingredient in her latest experiment. However, Lola doesn't realize that the ultimate fragrance is also the ultimate weapon, because the Flora Occulta can turn people invisible — and now, so can her perfume! Lola befriends cab driver Bugs Bunny, and they find themselves wanted fugitives pursued by four separate parties: federal agent Elmer Fudd, who's working with army general Foghorn Leghorn to keep the flower out of the wrong hands; Cecil Turtle, who seems to be on Leghorn's team but is actually a Double Agent working for Marvin the Martian, who wants the flower for nefarious purposes; Giovanni Jones, Lola's boss, who tries to pass off her valuable formula as his creation (after he fires her); and Yosemite Sam, a "little hillbilly leprechaun" and would-be bank robber who has no idea what's going on, but goes after Lola and Bugs anyway because there's a price on their heads and he's broke. Along the way, rival cabbie Daffy Duck gets mixed up with Bugs and Lola for a while, and several other Looney Tunes characters appear.

Daffy Duck observes a Duck Exhibit, along with the irony that comes with this particular situation.

Daffy Duck observes a Duck Exhibit, along with the irony that comes with this particular situation.