"i never doubted me"
— Joshy 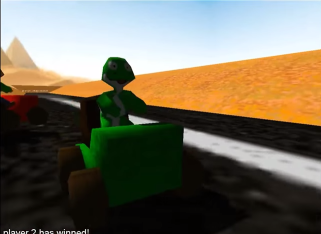 No question
Supra Mayro kratt is a sequel to Supra Mayro Bross and Stylistic Suck parody of the Mario Kart games. It features two stages, three characters and two players max. It also has a few glitches, such as someone winning after one other player already won and players spinning out for no reason whatsoever.
Advertisement:

The game is playable on Kongregate, but requires the Unity plug-in to run.