Video Game / Who's Your Daddy? 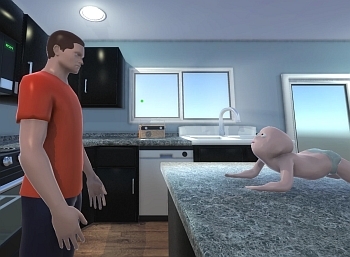 This job should be easy...note Should is the key word
Advertisement:

Yes, this is real.

The house is definitely not babyproofed. As such, there are many ways for the baby to kill himself. Bleach, Windex, batteries, forks, hammers and more are lying around. It's possible for the baby to open the oven, turn it on, then climb inside and bake to death. Or stick a fork in an electrical socket. Or use a hammer to shatter a glass table, then eat the shards of glass.

The dad gets rewards for doing chores. For instance, picking up toys and putting them away can grant him the ability to see the baby through walls.

The premise can be seen as either hilarious, particularly in part due to the awful graphics and half-assed animation, or just plain wrong.

The game's official Steam page for it is here.

The full game was scheduled to be released on April 29, 2016, but was delayed a week to May 6, 2016, and is slated to continue to be updated afterwards.

Who's Your Daddy? - Animated

"How can you say no to this face?" - PewDiePie tries to appeal to JackSepticEye with cuteness.

Who's Your Daddy? - Animated

"How can you say no to this face?" - PewDiePie tries to appeal to JackSepticEye with cuteness.