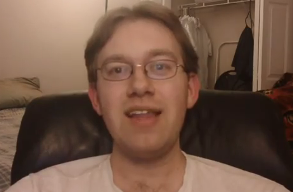 Hullo, this is HC Bailly. And I finally have a picture on this page!
"Hullo, this is HCBailly. And welcome back to Let's Play (title of game, always emphasized as if pronounced with three syllables)!"
— The opening of just about every single LP video he has ever made.
Advertisement:

HCBailly produces Let's Play video series on YouTube for many Eastern RPG and S/NES-age Action RPG video games. Most of his LPs are for Squaresoft, Enix, and Square-Enix games, with the bulk of his library consisting in games from the 8- and 16-bit eras; however as shown in the list below, he has done LPs for games from other publishers and for other consoles as well, Final Fantasy XIII being his first HD LP.

The focus in his LPs lies mainly on information and completeness; as the channel description quote indicates, they are quite similar to a walkthrough, though they still contain the humour, opinions and fridge observations usually found in Let's Plays. All of his series are for games he has played numerous times before, not only in his childhood (as with the older classics), but also in preparatory test-runs for the LP series. Having familiarized himself with these games, his LPs typically exemplify all the methods and secrets needed to achieve 100% Completion and Game-Breaking allocations of stats and resources, with minimal to zero Level Grinding whenever possible. He even explains how the game works and takes time to figure out how they work; which will help others play the game.

His real name is Henri Carl Bailly. He revealed what H means in his Terranigma LP, and he revealed what the C meant in his very first episode of Trials of Mana (surprisingly, it didn't turn out to be 'Cliffhanger' or 'Catchphrase').

He is also a member of The Game Station.

Has a page for all his catchphrases right over heeeere.

Games in preparation, in alphabetical order:

His Let's Plays provide examples of:

"But will we achieve (insert goal here)? Find out next time, on Let's Play (title of game here, always emphasized as if pronounced with three syllables)! This is HCBailly, signing off. Have a good day!"
— The ending of just about every single LP video he has ever made.