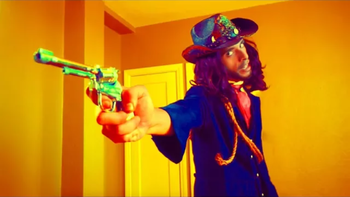 is the creator of a YouTube channel which produces sketch videos that often combine elements of incredibly offensive comedy, tight plots with twist endings, and a surprisingly dark imagination. Its videos often feature surrealist visuals (usually achieved through color contrasting, jumpy editing and the occasional deliberate Special Effects Failure) as well as characters who happen to be awful, horrible people but are mocked for this and have surprisingly solid personalities.

Clips of Brandon's videos became rather popular on Vine, with people often discovering his content after seeing them there.