Theatre / They Knew What They Wanted 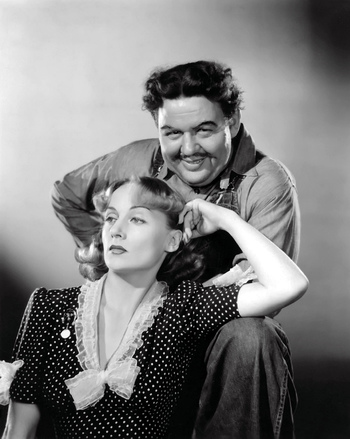 They Knew What They Wanted is a 1924 play written by Sidney Howard.

Tony is an Italian immigrant aged about 60 who has prospered as a Napa Valley vintner, and he's prospered even more since Prohibition has made his grapes even more profitable. Tony wants someone to share his prosperity with, so he has sent away for a wife. The young lady he wrote to, a San Francisco waitress named Amy, arrives at the vineyard, only to find that the picture Tony included with his letters was of his much younger and handsomer vineyard manager, Joe. Joe is rather embarrassed to be caught in the middle of this little deception — but sparks fly between him and Amy anyway.

The play, which won the Pulitzer Prize for Drama, was adapted into film three times, most notably as a 1940 version directed by Garson Kanin and starring Carole Lombard and Charles Laughton. It was also loosely remade into a 1956 musical, The Most Happy Fella, which deleted some of the social commentary and added more romance.