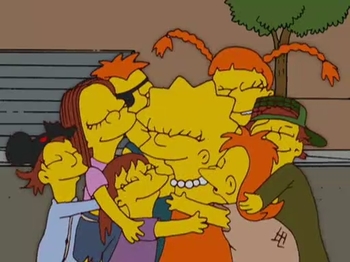 "Yokel Chords" is an episode of The Simpsons that first aired on March 4, 2007. Episode Code Number JABF09.

When Lisa threatens to expose Principal Skinner (Harry Shearer) and Superintendent Chalmers (Hank Azaria) for refusing education to Cletus Spuckler's kids due to their low social standing, she becomes their homeschool teacher, only to lose them to Krusty (Dan Castellaneta), who exploits them. Lisa reaches out to Brandine Spuckler (Tress MacNeille), who is currently serving in the Army in Iraq. A helicopter brings her to Sprinfield so she can rescue her kids.

Meanwhile, Bart is sent to therapy after manipulating his classmates with an urban legend of a cannibalistic Lethal Chef. Guest starring Meg Ryan as Dr. Stacey Swanson.