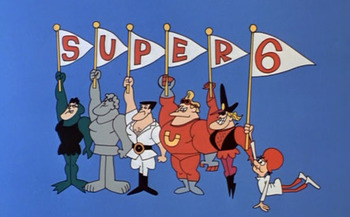 The Super 6 was a 1966 animated comedy by DePatie-Freleng Enterprises.

Interestingly enough, in an era replete with superhero satires and parodies and efforts to imitate the Camp appeal of the Adam West Batman craze, The Super 6 was more of a Work Com that happened to involve freelance superheroes for hire. Though the characters exhibited the standard Saturday Morning Cartoon simplicity of characterization, the focus of most episodes involved how they responded to the episode's task, not their powers and not their opponents, with little if any commentary one way or the other on Superhero Tropes.

The title characters are super heroes who work at Super Service, Inc., where people can call in to request help from a superhero.

Also part of the show is an unrelated short called "The Brothers Matzoriley" who are basically three heads in one body. Weft, the left head, is a Moe Howardesque tough guy. Wight, the right head, is a wimpy coward. Wong, the middle head, is a Chinese stereotype.

Has been released on DVD.

Not to be confused with Big Hero 6.