Western Animation / All This and Rabbit Stew 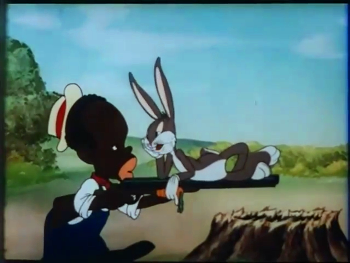 Seriously, what's up with this cartoon, Bugs?!?

"All This And Rabbit Stew" is a 1941 Merrie Melodies cartoon short starring Bugs Bunny. It's notable for being one of the four Bugs Bunny cartoons directed by Tex Avery and being such a controversial racially offensive cartoon that it is included on the Censored Eleven list, a list of 11 Looney Tunes cartoons banned from being distributed or broadcast in the USA, and is also one of the 12 Banned Bugs Bunny cartoons.

The plot features Bugs Bunny being hunted by a slow-witted Afro-American hunter who is a hodge-podge of every possible stereotype associated with black Americans at the time. As a result its nowadays perhaps more notorious for the controversy than for its artistic merits.

The scene where Bugs fools the hunter with a hollow log over a cliff was re-used in the Bugs Bunny cartoon "The Big Snooze", only with Elmer Fudd used instead.

Should not be confused with the 1950 Terry Toons cartoon short of the same name.