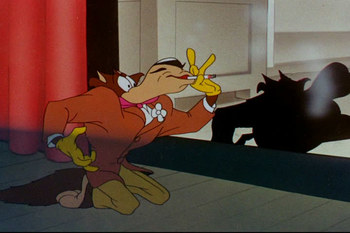 "Bacall to Arms" is a 1946 Merrie Melodies cartoon, directed by an uncredited Bob Clampett (with additional work done by an also uncredited Art Davis).

The cartoon is set in a movie theater, various random gags occur with the audience, while a lecherous wolf makes a pass at a sexy movie usherette, gets slapped in the face, then settles down as the movie begins. After a short newsreel, the main feature is shown, To Have- To Have- To Have- a parody of the 1944 film To Have And Have Not, featuring "Bogey Gocart and Laurie Becool", which recreates and parodies scenes from the film. The wolf goes ga-ga over Bacall and he ends up interacting with the film itself. The final gag has the wolf grabbing a cigarette that was dropped in the film and jumps off the screen, and Bogie shoots him. He hands it to Bogie and it explodes, making Bogie don the likeness of "Eddie 'Rochester' Anderson" as he says, "Mah, oh mah! I can work fo' Mr. Benny nah!"

"Bacall to Arms" provides examples of: