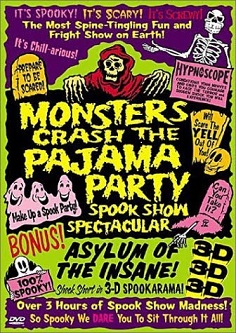 Monsters Crash The Pajama Party is a 1965 Horror-Comedy Short Film directed by David L. Hewitt that is one of the few artifacts of the era of the Spook Show. These were theatrical presentations that combined films with Audience Participation, specifically the actors from the film running into the theaters and "attacking" people in the audience. The plot centers around a group of frat boys and sorority initiates having to spend the night in what appears to be an abandoned mansion that is rumored to be a haunted house. Of course, it is, with a Mad Scientist conducting experiments with the help of his Mook, Big G the Gorilla.