Film / My Name Is Oona 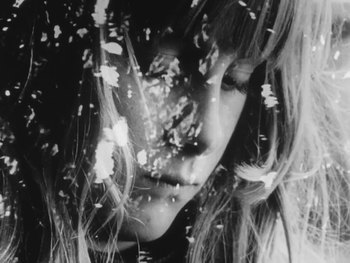 My Name Is Oona is a 1969 experimental short film (ten minutes) directed by Gunvor Nelson.

The film is Gunvor Nelson's portrait of her nine-year-old daughter, Oona. Oona's activities are pretty mundane: she smiles for the camera, she brushes her horse, she roughhoused with a friend, she rides her horse in an open field. However the film, shot in stark black-and-white, is a series of avant-garde images—superimpositions, negative images, super slo-mo. Adding to the weirdness is the soundtrack, which consists mostly of Oona Nelson saying the sentence "My name is Oona" over and over and over and over again, with that single line of dialogue distorted, double-tracked, and otherwise played with.