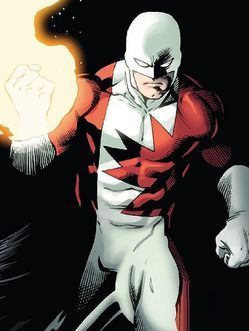 The original leader and founder of Alpha Flight. Department H, the section of Canada's government that works with superhumans, is named after him. Originally thought to have died in Alpha Flight #12, he later returned through some rather complicated circumstances involving aliens and becoming a cyborg. Briefly went by Vindicator, but is best known as Guardian. 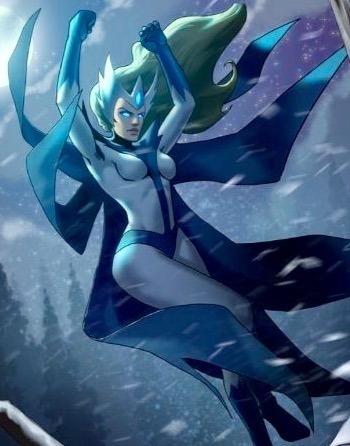 The daughter of a mortal and a Goddess, Narya was to the the champion of her people against the Great Beasts, the Gods of death and decay. She later married a mortal named Doug Thompson and had a child, though this eventually led to a mercy kill at the hands of Heather Hudson. She later returned and accepted her identity as a goddess. 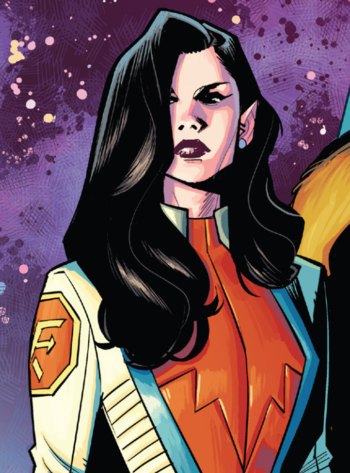 A mutant and the twin sister of Northstar. Aurora was sent to live at a religious school for girls as a young child after her parents died, separating her from her brother. Her experiences there scarred her, leaving her with split personality disorder. She later joined Alpha Flight and reunited with her brother, though their relationship is often rocky. 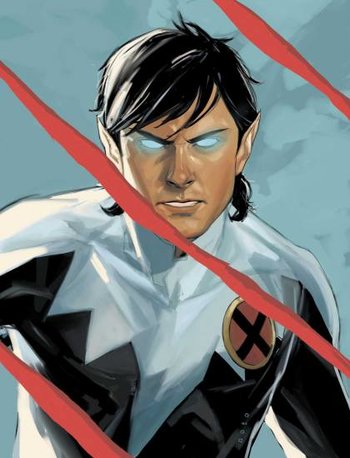 A mutant and the twin brother of Aurora. While his sister went to a religious school after their parents' death, Northstar was sent to live with his cousins the Martins. He eventually became an Olympic-level skier, though whether this was due to his powers or not was left ambiguous. He later, begrudgingly, joined Alpha Flight in order to meet his sister. 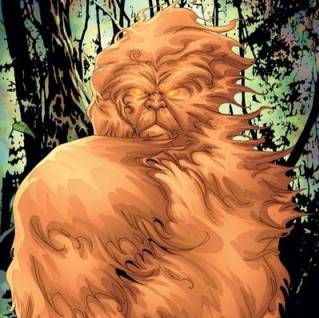 Brilliant scientist and former football player, Walter Langkowski heard about Bruce Banner's experiments with gamma rays and his transformation into a Hulk. In an attempt to become like the Hulk, Walter dosed himself with huge amounts of gamma radiation. However, he actually opened a portal into the realm of the Great Beasts (the evil gods of death and decay) and was possessed by one of their number. This gave him the power to become a super strong and nigh-invulnerable Sasquatch like creature. His situation only got more complex as the years went by. 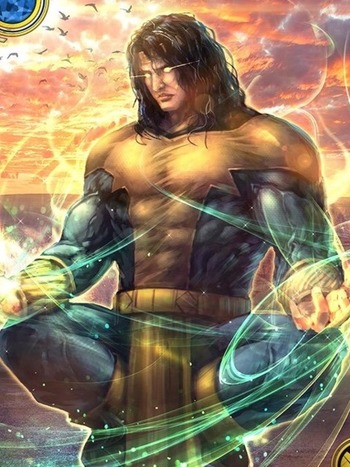 Michael Twoyoungmen is a Sacree mystic and member of the original Alpha Flight. Much like Dr. Stephen Strange, Michael was a skilled surgeon who later turned to mysticism. In his case, it was because he had failed to save his wife from death and had estranged himself from his daughter. Shaman also delivered Snowbird into the world and bound her to the mortal plane. Michael's powers were originally centered around a mystical medicine pouch that he could draw magical items out of, though he spent a period where his powers allowed him to ask spirits for help in performing mystical feats.

These members were recruited to the team after its original formation. Typically, they were characters already associated with the team for one reason or another, such as being a member of the "B-Squad" team Beta Flight or having appeared as a background character in previous issues. 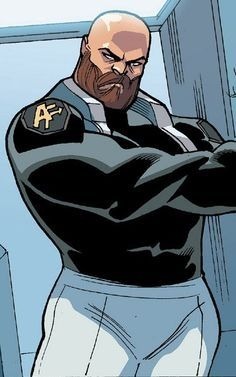 Eugene Judd was, at first, an ex-military man with dwarfism who possessed incredible natural agility and acrobatic skills. He was briefly a member of Beta Flight, before being moved up to Alpha Flight. In later issues of Alpha Flight, it was retconned that Puck was originally a very tall man and was actually quite old, but that he had been made short by an encounter with an evil, mystical being. Even later still, Puck was modified on the genetic level and given true blue superpowers. 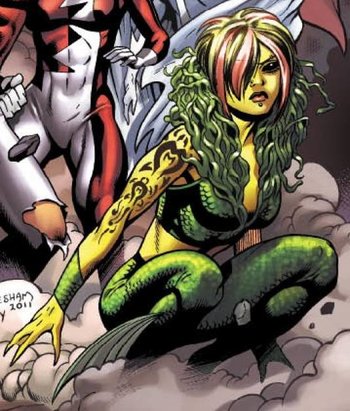 Marrina Smallwood was part of a plan by an alien race called the Plodex whose MO was to send thousands of eggs to a planet, have those eggs absorb the genetic traits of the inhabitants and then destroy them from within. However, Marrina's egg was one of two to survive its journey to Earth and landed in the water. Some time later, it was found by a family from Newfoundland and was touched by the family's mother. Thus, she transformed into an amphibious female humanoid with green skin and hair. Nevertheless, Marrina was happily adopted by the family and their community. Originally a member of Beta Flight, she briefly joined Alpha Flight before leaving the team to be with Namor.

Heather Mcneil Hudson was the wife of James Hudson, founder of Alpha Flight, as well as his secretary. As such, she was a supporting character for the team for some time. After her husband's "death" she became the leader of the team, mostly out of pity from the remaining members. Not wanting to be a burden, she took a super suit identical to the one her husband had worn from a villain and used it to become Vindicator, superpowered leader of Alpha Flight. She remained in this role until her husband's return some years later. 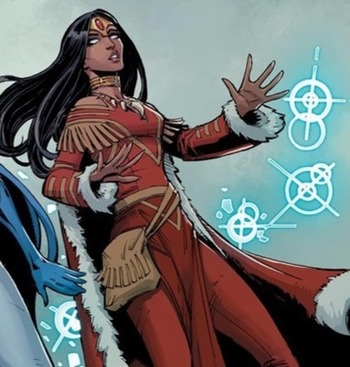 The daughter of Shaman, Elizabeth became distant from her father after he failed to save her mother from death. As an adult, she became an archaeology student, but joined Alpha Flight after putting on a magical circlet that gives her control over spirits.

A Beta Flight recruit, robotics genius Roger Bochs was a paraplegic after his legs were cut off at the knee, but created a robotic body that he could control with a helmet and was later improved to allow him to merge with it completely. Bochs originally joined Omega Flight, an evil version of Alpha Flight, but as a traitor. He later joined Alpha Flight after helping them save the soul of Walter Langkowski, whose physical body had died. He remained a member of the team until his death. 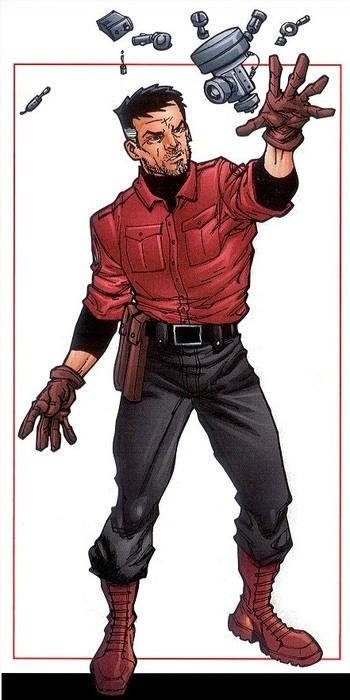 Originally a member of Gamma Flight, the Canadian Government's "C-Squad" of heroes, he later graduated to Beta Flight and then joined Alpha Flight first as a supporting character and then as a full member. Madison is a mutant with the power to telekinetically control the materials that make up machines such as glass, metal, plastic, etc.

Like her husband Madison, Lillian "Diamond Lil" Crawley-Jeffries was a mutant. Her power generated a "bio-aura" that made her nigh-invulnerable. While initially part of the villainous Omega Flight, circumstances forced to work with and eventually become a member of Alpha Flight. 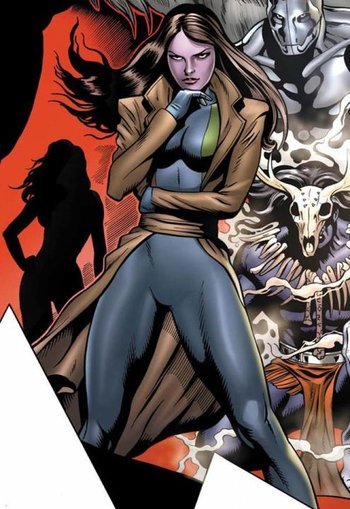 Daughter of the Supervillain Zebediah Killgrave AKA The Purple Man, Kara Killgrave's childhood was without incident. She grew up in a normal suburban setting with her mother Melanie. However when Kara turned thirteen, at the onset of puberty, her body completely turned into a shade of purple On seeing this Melanie begins to reveal to Kara the identity of her father, and the circumstances of her birth. The shock of her changing appearance and her mother's startling revelations were too much for Kara to cope with and she fled. Realizing her power, she impulsively kidnapped Northstar and made him take her to a deserted island where she intended for them to remain. Fortunately he managed to regain his mental control and delivered her to Alpha Flight's headquarters where she promptly escaped by using one of their members. Fearing the team intended to harm her, she used her powers again, this time on the whole group. She escaped, taking Madison Jeffries with her. On the run, they fell for a time into the clutches of the Auctioneer. When rescued by Alpha Flight, Heather Hudson recruited Kara as the first member of the newly created Beta Flight.