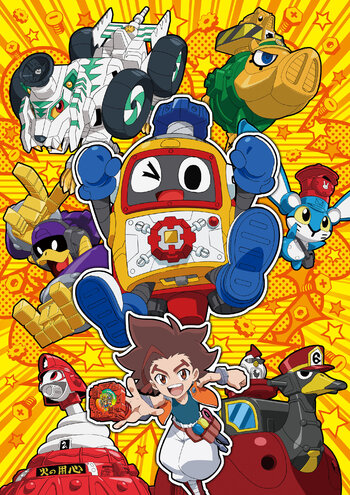 Screwed morning to you!
Advertisement:

In the morning of Prince Negil Nejiru's 11th birtday, his father the King Jill Hanazir gifts him the Screw Soul and a personal VocaBot, Heybot, a personal companion and a partner in VocaBattles. Excited, Nejiru fights his father right away, and Curb-Stomp Battle ensues. The King exiles Nejiru and Heybot until they gather various powerful VocaNeji Screws to challenge him again.

This series is... Weird, to put it simply. It can best be described as Gintama meets Beyblade. Nejiru and Heybot run a do-anything shop to help random characters or battle the recurring cast for their screws. The plot of each episode is as random as possible with frequent Surreal Humor and No Fourth Wall.

The brainchild of the director Shinji Ishihara, along with Atsuhiro Tomioka, he was asked by Bandai to make one last show for Nagoya TV's note  the Nagoya affiliate of TV Asahi long running Metele Station Ends Anime Block using their new toy as a prompt. And using Doctor Slump and Patalliro! as the main inspirations, they've decided to go all out.

Produced by Bandai Namco Pictures. Aired in 2016-2017 on TV Asahi and its affiliates for 50 episodes as part of Super Hero Time block alongside Doubutsu Sentai Zyuohger and Kamen Rider Ex-Aid. Aired with English subtitles on Crunchyroll.