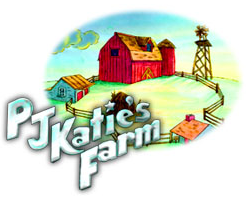 Commissioning this logo cost half the show's budget.
Advertisement:

A Canadian children's television program that aired on YTV in the 1990s, spun off from some interstitial segments that aired on the channel beforehand. The premise was quite simple; PJ Katie (real name Jennifer Racicot), the show's host, had some farm animal figurines she made from plasticine, and she would tell stories about the various adventures the animals have.