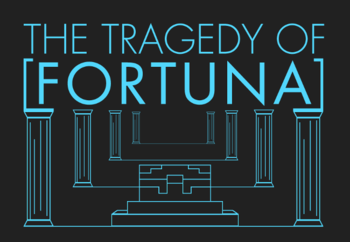 Everything is going to be alright
"A Space adventure about life and robots, but mainly about robots, in fact I'm lying it's just about robots."
— Author's forum signature

Fortuna is an ongoing Interactive Comic by GimeurCookie. Presented in the form of an anonymous entity playing a videogame, it follows varying crews of space travelers as they search for the legendary planet Fortuna and the treasure it contains.

on the author's website. It can also be read on MSPaint Fan Adventures in a "nice clean log" here

. And the forum thread with the suggestions used to be located here

. Another newer, currently unfinished redux, as of now, can be read here

. The Cosmosdex is another helpful site for learning about the species in the Fortuna universe. That site is here