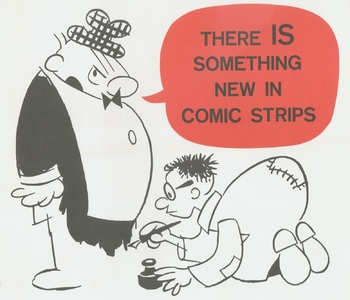 Sam's Strip was a Newspaper Comic strip created by Mort Walker (of Beetle Bailey fame) and Jerry Dumas. It originally ran from 1961 to 1963, but was later retooled and brought back in 1977 (more on that later).

During its original run, the strip concerned itself with businessman Sam and his nameless assistant, trying to make a living. At first, this might not sound all that remarkable... until you consider what business they were in: running a comic strip. No, they didn't write or draw one. They were cartoon characters who openly acknowledged that they were cartoon characters, and their "business" consisted of them owning and operating the strip they inhabited. In other words, it was one of the most blatant cases of No Fourth Wall in the history of newspaper comics.

Their running the strip consisted of things like keeping dust clouds and angry thought bubbles in storage closets, spats with their artist, spats with each other, meeting with other famous comic strip characters, and (above all else) unsuccessfully trying crazy schemes to increase readership.

Sadly, life imitated art. Although loved by cartoonists and comics aficionados, Sam's Strip was just too experimental to catch on with the general public; the series was cancelled after three years.

In some ways, this was where the strip ended; in some ways, it wasn't. In 1977, Dumas and Walker relaunched the strip as Sam and Silo. While it kept the two main characters, it abandoned the original concept. Sam and Silo were now a pair of bumbling police officers in a Mayberry-like town. While this wasn't nearly as imaginative or unique, it proved far more popular; as of 2017, Sam and Silo is still being produced and published.

Although the original incarnation is long gone, it's left enough of an impression on its readers to be remembered fondly and earn itself a page on this wiki (woo hoo!).

These two Strips contain examples of: