Video Game / The Sea Will Claim Everything 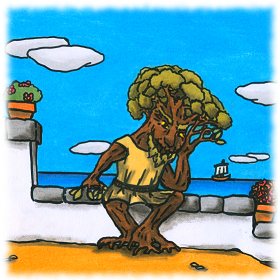 "We are all like islands, the philosopher said. Perhaps it's true. But I cannot help but remember an older saying, scratched on a cave wall somewhere by a long-forgotten prophet: in the end, the sea will claim everything."
Advertisement:

The Sea Will Claim Everything is an Adventure Game with an emphasis on narrative, created by Jonas

and composed by Chris Christodoulou

. After Underhome is foreclosed on and traumatised by government agents, The Mysterious Druid creates a portal to the Lands of Dream

and asks the player to help heal Underhome and save it and its inhabitants. Along the way, the player becomes involved in the affairs of the local islands, which are sinking under debt and being bought and privatised by Lord Urizen.

TSWCE is an oddball that doesn't fit very well into existing video game genres. A personal, political, and philosophical work reflecting on the Greek government-debt crisis

, TSWCE may be best described as a children's story book for adults.