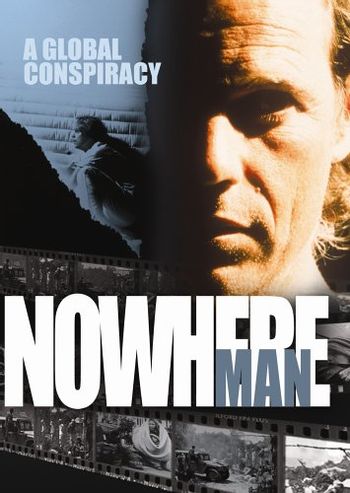 "My name is Thomas Veil, or at least it was. I'm a photographer, I had it all: a wife, Alyson... friends, a career. In one moment it was all taken away, all because of a single photograph. I have it, they want it, and they will do anything to get the negative. I'm keeping this diary as proof that these events are real... I know they are... they have to be..."
—Opening Narration
Advertisement:

The noirish action of Nowhere Man may or may not be taking place entirely in the mind of its hero, Thomas Veil (Bruce Greenwood), a photojournalist specializing in stark, brutal war shots. In the first episode, Veil attends a showing of his work, which includes "Hidden Agenda," a disturbing photo of American military personnel apparently presiding over an execution in an unnamed Third World country. Almost immediately upon its display, Veil's life is ... destroyed. Erased. Zeroed. Un-Personed. He becomes a fugitive non-person, on the run from the mysterious forces that want the "Hidden Agenda" photo destroyed and forgotten.

The series has Veil Walking the Earth, dealing with often disturbing happenings throughout middle America which were probably caused by the same organization that is targeting him, although hard truths are difficult to come by on this show, and the viewer is often left with a sense of uncertainty which mirrors Veil's own.

Not to be confused with the song by The Beatles.

Note: in some cases below even the trope names can be spoilers.