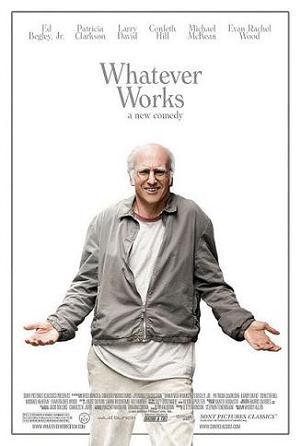 "That's why I can't say enough times, whatever love you can get and give, whatever happiness you can filch or provide, every temporary measure of grace, whatever works."
— Boris Yelnikoff
Advertisement:

Boris Yelnikoff (David) is a cynical chess teacher and former Columbia professor in quantum mechanics. Boris comes home one night to find Melody (Wood), a simpleminded 21-year-old, lying on his doorstep. He reluctantly lets her in for a meal and soon she tells him her story. She turns out to be of a distinctly southern background, having been born to fundamentalist parents in Mississippi and ran away from them. She asks if she can stay the night, which Boris eventually allows, and she stays with him while she looks for a job. Melody develops a crush on Boris despite their age difference and their varying cultures and intelligence. After a while, Boris realizes that he loves her and they get married.

After a year passes, her mother Marietta (Clarkson) finds Melody, having thought Melody had been kidnapped, and explains that her husband John (Begley Jr.) left her. In the next few weeks, being exposed to New York changes Marietta and she starts experimenting arts and exotic new habits. However, after she meets Boris she is disappointed with him, so she slyly decides to recruit Randy Lee James (Cavill) to end Melody's marriage.