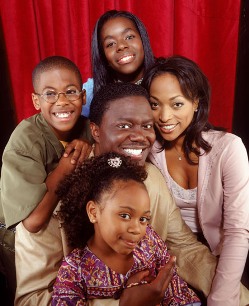 The Mac family channeling their inner Huxtables. Otherwise, they'd kill each other.
Im'ma bust yo' head 'til the white meat shows!
—Bernie Mac (on a bad day)
I thought those kids were just spoiled
But all this time, they wanted to go back to the projects.
Isn't that the stupidest thing you ever heard?
Oh those beautiful, stupid kids.
—Bernie Mac (on a becoming-good-but-not-for-too-long day)
Advertisement:

Parenting is hard. When The Bernie Mac Show debuted on November 17, 2001, audiences watched the Kings of Comedy comedian learn that lesson the hard way when he adopted his two nieces [Vanessa and Bryana] and nephew [Jordan] from their Chicago home. It was for good reason, since their mother was stuck in rehab and unable to properly care for her kids. With his wife Wanda, Bernie Mac helps raise the young trio in his Los Angeles home and give them a sense of stability they lacked at home. The results are...quite varied, what with Vanessa's rebellious streak, Jordan's mix of hypochondria and odd obsessions (one being breasts), and Bryana's sugary innocence.

The sitcom is loosely based on Bernie Mac's real-life experiences (something Everybody Hates Chris also benefited from years later), and was also inspired by a Kings of Comedy routine he performed a year earlier. Ratings for the show were initially mediocre, but it gained a solid following during its debut season. Critics and viewers connected with the comedian's cruder, more honest perspective on parenting and appreciated the subversions of several tried-and-true sitcom devices along the way. These subversions include the lack of a Laugh Track, the episodes are more narrowly focused on a singular theme instead of balancing several storylines, and the comedian addresses the audience in fourth wall breaking discussions when he deals with his frustrations, woes and epiphanies. In a TV environment that restricted many black comedies onto UPN (and mostly derivative ones at that), this was considered a breath of fresh air.

Despite The Bernie Mac Show's strong reception during the first season, the biggest roadblock to its future success was...well, Fox itself. When My Wife and Kids aired on ABC during 2002's fall season on the same time slot, trepidation set in when the ABC sitcom kept beating The Bernie Mac Show in the ratings. As a result, Fox demanded executive producer Larry Wilmore to emulate the more traditional style of My Wife and Kids for The Bernie Mac Show. This caused conflicts between them and eventually resulted in the producer's firing. Fox constantly shuffling The Bernie Mac Show around its schedule hardly helped, which made many fans think it was canceled a season or two before it actually was, especially considering that these changes came from the Fox executive who screwed over Joss Whedon's Firefly royally.

Nevertheless, The Bernie Mac Show stayed on the air for 104 episodes and 5 seasons, which was long enough to snag syndication status (it currently airs on FX and BET). With the comedian's death from pneumonia in 2008, the sitcom has become one of his most well-known and respected works.