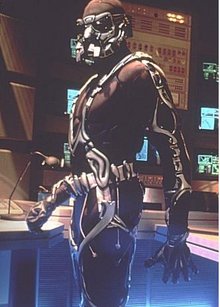 The hero of our story.
"This is the scientific journal of Doctor Miles Hawkins, to be made public in the event of my death. I know, when the truth is known, people will wonder why I felt it necessary to create the M.A.N.T.I.S. In reality, I never did. The M.A.N.T.I.S. demanded his own creation, and I could not refuse him."
Advertisement:

M.A.N.T.I.S. (1994-1995, 1997) was a short-lived (one season) science fiction series on FOX starring Carl Lumbly and produced by Sam Raimi and Renaissance Pictures.

It followed the adventures of Dr. Miles Hawkins, a paraplegic scientist who develops a power suit (the titular M.A.N.T.I.S., or Mechanically Augmented Neuro Transmitter Interception System) that not only allows him to walk again, but to fight crime as well.

It is notable for being the first live-action television series to feature an African-American superhero as the main character.

The full series is available on Hulu