Film / No Deposit, No Return 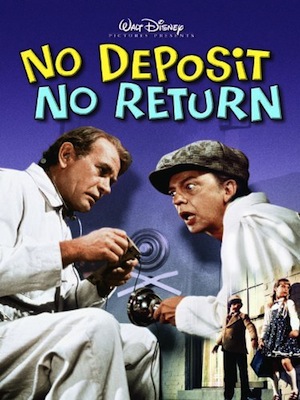 Tracy (Kim Richards) and Jay (Brad Savage) are two children who are excitedly looking forward to an Easter vacation with their mother. Unfortunately, their mother is too busy to see her children, and they are instead being sent to their wealthy grandfather J.W. Osborne (David Niven) for the umpteenth time. Tired of the same vacation they get every Easter, Tracy and Jay run away from the airport (with their pet skunk) and end up getting taken in by Duke (Darren McGavin) and Bert (Don Knotts), two down-on-their-luck safe crackers with a huge sum of money to pay to their loan shark Big Joe (Vic Tayback).

Meanwhile, police sergeant Max Turner (Herschel Bernardi) has spent his career chasing down the infamously unlucky safe crackers, but his search has been fruitless. Partnered with rookie detective Longnecker (Charles Martin Smith), he is put on the case of the apparent kidnapping of the two children for a $100,000 ransom. This is, of course, just a brilliant scheme by the two children to help their two benefactors out of their debts.

However, not only does the grandfather fail to take the ransom seriously, but Big Joe finds out about the ransom, and decides to kidnap the children for real. Meanwhile, the kids' mother comes to Los Angeles to help Turner and Longnecker bring Duke and Bert to justice...