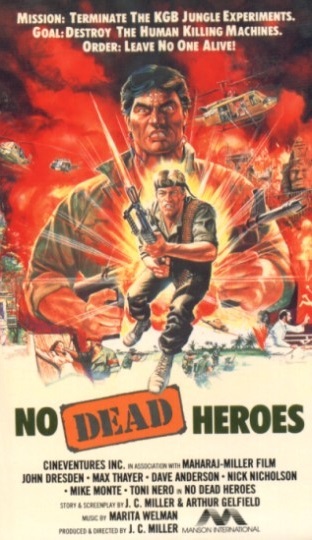 The Mission: Terminate the KGB Jungle Experiments.
The Goal: Destroy the Human Killing Machines.
The Order: Leave No One Alive!

No Dead Heroes is a 1986 action movie starring 80s B-grade action icon Max Thayer, John Dresden and Nick Nicholson, where Max plays a soldier who finds out his old supposedly-dead buddy from The Vietnam War is still alive... and is being used as a mindless killing machine by a ruthless KGB project.

In the 1970s, a botched rescue mission into a Vietcong camp, led by US Marine Lieutenants William Sanders (Thayer) and Harry Cotter (Dresden) results in William being the only survivor of the raid, having witnessed his friend Harry being captured by the Vietcong's Spetsnaz advisor, General Ivan Dimanovitch. The war soon ends, with Harry presumed dead by everyone including William, but a decade later Harry turns out to be still alive... and is now a ruthless assassin working for General Ivan, now headlining a KGB Project meant to strip prisoners of their humanity.

Dragged back in action, it's up to William to confront his old, brainwashed friend, to bring back Harry at all costs, and inspire the plot of an MCU movie a few decades later. Huh.