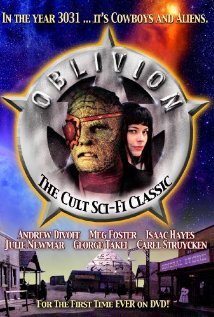 "Welcome to the future."

Zack Stone is the pacifist son of the sheriff of the town of Oblivion. His dad is murdered by the outlaw Redeye, who proceeds to terrorize the townspeople. Stone must get over his pacifism and return to his hometown to avenge his father's death.

Has also become a subject over at RiffTrax.