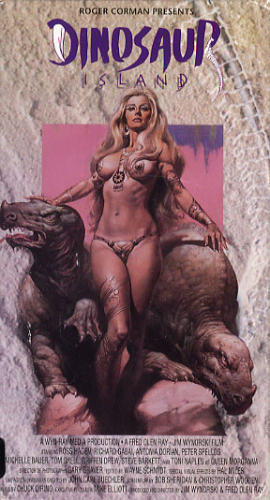 Dinosaur Island is a 1994 B-Movie directed by Fred Olen Ray and Jim Wynorski, whose plot is based off the explorers-discover-land-where-prehistoric-animals-managed-to-survive-unchanged and explorers-discover-society-inhabited-entirely-by-beautiful-women B-Movies of The '50s.

An army captain is flying three misfit deserters home when the plane has engine trouble and they crash-land in the ocean near an uncharted island. They find that dinosaurs have managed to survive there, alongside a primitive society of cave women who routinely sacrifice virgins to appease the Great One, the top-dog dinosaur on the island. Mistaken for gods as part of a prophecy, the men must destroy the Great One or face death, but meanwhile they fall in love despite the advice of their Queen, who tries to dissuade them from being corrupted by the outsiders' ways.