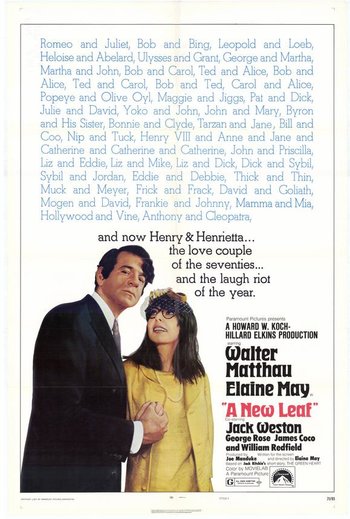 A New Leaf is a 1971 Black Comedy film written and directed by Elaine May, who also co-stars with Walter Matthau.

Henry Graham (Matthau) is a spoiled, pompous man who has spent all of his inherited wealth and has no way of earning a living for himself by working. Days away from having to forfeit his property, he decides to marry eccentric but rich botany professor Henrietta Lowell (May), and then plots to murder her.

The film had a Troubled Production, going 40 days over its shooting schedule and more than $2 million over its budget. After months of post-production and editing, Paramount demanded that May produce a rough cut; when she refused, the film—which at that point was supposedly three hours long—was taken out of her hands. Studio head Robert Evans had the running time reduced to 102 minutes and removed a few of the film's darker elements, including a subplot in which Henry poisons two men who have been blackmailing Henrietta.

Though well received by critics, it was only a modest commercial success.note It took in around $5 million, which actually made it one of the top 20 earning films of 1971, but that was only enough to barely turn a profit.

For more on Elaine May's battles with film studios, read about Ishtar.

"There's some carbon on the Tropes":