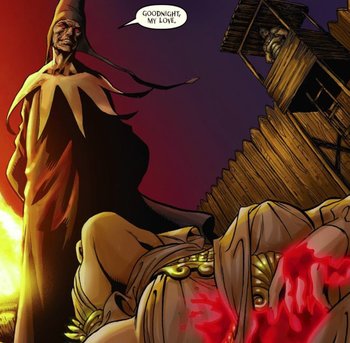 Kulan Gath puts all other evil sorcerers to shame.
"History's end is assured! I will bring darkness into this world! I will rule over it! And as with all things, it begins...with BLOOD. Innocent blood...and the darkness rises."
—Kulan Gath, while performing a Human Sacrifice
Advertisement:

Of all the many evil sorcerers, barbaric kings, and dark gods the Hyrkanian she-devil has fought through her various incarnations, these characters stand out as the nastiest.