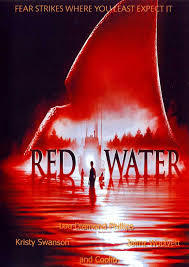 2003 Made-for-TV Movie about shark attacks on a river. Also includes a plot involving stolen mob money. Stars Lou Diamond Phillips, Kristy Swanson and Coolio. Better than its kind of film tends to be.

A crimelord sends three of his men -including a psychopathic diver obsessed with sharks and a rapper-like thug (Coolio)- to recover 3 million dollars stolen from him and hidden in a river in Louisiana, near an oil rig. Meanwhile, a bull shark swims up the river and starts attacking people. The local Cajuns think it's a spirit angry because of the oil drilling. A reward of $10,000 is offered for killing the shark.

John Sanders (Phillips), a former oil rigger, his ex-wife Kelly (Swanson), her boss, and John's friend Emery are captured by the thugs, who force them to dive for the money when they discover the shark prowling around. Ultimately, the thugs are killed either by Sanders or by the shark, and the shark itself is killed with the oil drill.

In the end, John, Kelly and Emery decide not to cash in the reward, out of "respect for the legend".