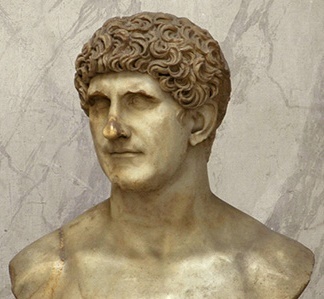 Marcus Antonius (14 January 83 BC – 1 August 30 BC) was a Roman general and politician. Lover of Cleopatra VII, ally of Julius Caesar, rival of Octavian, enemy of Cicero. One of the most famous Romans in history, Mark Antony was an important and tragic figure in the Roman Republic's transition into the The Roman Empire.

Antony served as one of Julius Caesar's most trusted legates for much of Caesar's campaigns in Gaul in the 50s BCE, alongside Titus Labienus (who later fought against Caesar on the side of Pompey) and Marcus Lepidus. Was known for being a brilliant military general, but a horrible politician. Caesar once famously exiled the man to busywork in Transalpine Gaul after he, while serving as Caesar's "overseer" of the Senate while Caesar was busy in Egypt, made an absolute mockery of proceedings, routinely showing up drunk to Senate meetings and generally making a fool of himself, in the process gaining a serious beef with Cicero, who publicly attacked Antony's character on several occasions.note Another reason for the enmity between Cicero and Antony was that Cicero, as consul, had ordered the execution — without trial — of Antony's stepfather for his involvement in the Catiline conspiracy. After this fall from Caesar's good graces, he was approached by several conspirators to take part in removing Caesar from power, but turned the offer down (though he didn't inform Caesar of the plans for some reason).

Then came Caesar's assassination, where Antony became the de facto successor to Caesar as the leader of the populares. He famously turned the mob against the conspirators at Caesar's funeral in one of the most important speeches in human history, whipping them into a frenzy and beginning a full-blown riot that chased the assassins out of Rome. He and Marcus Lepidus began to divide Rome between themselves, until Caesar's nephew Octavian entered the picture, having been posthumously adopted as Caesar's son and given his name. At first, Antony actively tried to hinder Octavian's rise by holding onto Caesar's money and keeping it out of Octavian's hands, but he was eventually forced to give in. After this, Octavian became belligerent to both Caesar's assassins and to his other Caesarian allies, bringing him and Antony into military conflict for the first time in a wild sequence of events that saw Octavian siding with one of his uncle's assassins. After emerging victorious in this conflict, Octavian began to take power in Rome while Antony was forced to hide in Transalpine Gaul. However, then Octavian made his peace with Antony, so that they, and Lepidus, could go after the conspirators to the East. To this end, they formed the Second Triumvirate. Before they could go to war, however, they needed money, and thus began to seize money and property from wealthy Romans, as well as enemy Senators, sometimes murdering them in the process. Antony used this opportunity to have Cicero killed. After the Triumvirs successfully vanquished the conspirators at the Battle of Philippi, Octavian and Antony re-divided the land, relegating Lepidus to being a minor partner while the two of them gained in power.

Thus began one of the most well-known rivalries and power struggles in history.

Octavian headed back to his half of Roman land to deal with matters more local to the city, while Antony moved eastward, dreaming of a campaign against the Parthians, as Caesar had reportedly wanted before his assassination. A campaign such as this would have won him eternal glory and would have cemented him as the most influential politician in Rome, a position Octavian was openly vying for. But to do this, he needed allies. First, he guaranteed the semi-independence of Judea by backing a local king named Herod (yes, that Herod). Then, in Tarsus, he met with Cleopatra for the first time. Cleopatra came to Antony dressed as Aphrodite, the Greek goddess of love and beauty, arriving in the city in a gold-plated boat rowed by silver oars with purple-dyed sails. It was as if a goddess herself had come to speak to him, and Antony, susceptible to flattery as he was, was intrigued. They negotiated, and her brazen manner won him overnote She apparently claimed that she could put on "the most expensive banquet in history", and then she did so by dissolving one of her earrings, worth millions by today's money, in her cup of wine and then drinking it. He went to Alexandria with her, and they began an affair, which produced three children over the years.

With the alliances made, he began his Parthian campaign... which turned out to be an utter, utter failurenote Parthia began with a preemptive strike, which made it a good bit into Roman territory (and included Titus Labienus' son being captured among them after a battle in Judea) before being turned around. Antony then tried to enter Parthia from the north and threaten their capital, only for Antony's bad decisions involving the baggage train to be their undoing. The Parthians destroyed the baggage train entirely after it was left to trail behind, and Antony's army was starved out of their own siege of Phraata, and were harassed by the Parthians the entire way back through Armenia as they retreated. He blamed the collapse of the campaign on the King of Armenia rather than his own bad decisions, ultimately costing Rome an alliance. However, his plans weren't completely derailed. He next attempted to engineer a complex web of dynastic alliances in Eastern Rome by giving his children with Cleopatra dominion over several territories in the area. On its own, this system would have secured Rome's hold over this land while advancing Egypt as a nation on its own and binding both nations together at the hip. This would likely have worked, if it hadn't been for one final proclamation: Caesar and Cleopatra had secretly been married before producing a child, Caeserion. In doing so, he named Caeserion as Caesar's legitimate heir and undermined Octavian's position, something he wouldn't take lying down.note It's worth pointing out that no, Caesar was not secretly wed to Cleopatra. Caesar had a wife whom he never divorced, despite having more than one mistress (something considered acceptable at the time), so such a marriage would have been illegal and would never have been approved to begin with.

With Octavian and Antony now firmly pitted against each other, Antony attempted to invade Greece to gain a foothold for a potential march against Rome to oust Octavian. Octavian, however, had an ace in the hole: Marcus Agrippa. Agrippa was a military prodigy, and in one move, ruined Antony's chances over land. Then at Actium, Octavian's navy demolished Antony and Cleopatra's, forcing them to flee back to Alexandria. Octavian and his army followed them there, and Antony was now faced with no hope of escape. He believed Cleopatra had already committed suicide rather than suffer defeat, and thus stabbed himself as well. However, he was mistaken, and was carried to her monument where he is said to have died in her arms. With him out of the way, Octavian then went on to gain absolute authority as the First Citizen, and later, the first Emperor of Rome.

Ironically, despite losing the struggle for supremacy, his brief relation to Octavian through his sister meant his bloodline lived on together with the Julio-Claudian dynasty. He is ancestor to the latter three emperors: Gaius / Caligula (his great-grandfather), Claudius (maternal grandfather) and Nero (both maternal great-great-grandfather and paternal great-great uncle). While Cladius would, to some extent, prove himself an able general and competent administrator in the vein of Julius Caesar, Augustus and Antony on his best days, Gaius and Nero became Trope Makers for the eponymous trope for a mad monarch, topping even Antony's worst excesses.