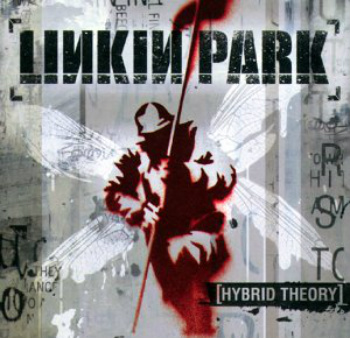 Hybrid Theory is the debut studio album by Linkin Park. Released on October 24, 2000, the album made the band a success practically overnight. Not only were they favorites on MTV due to presenting a "tough" image, but their mainstream-friendly lyrics took nu metal to an area it had never gone before: pop radio.

The album went gold after five weeks, sold over 4.8 million copies in the US alone in 2001 (making it the best-selling album that year), and went Diamond in 2005. It went on to sell over 30 million copies worldwide, making it the best-selling debut album of the 21st century. "Crawling" won a Grammy Award for Best Hard Rock Performance, and the album was largely credited for making harder rock more accessible to a mainstream audience.

While it's not without detractors (largely due to the nu metal premise), it's widely considered to be an album that defined the Turn of the Millennium, especially its early years. The interplay between rapping and singing soon became a staple in mainstream hits, making it effectively a Trope Codifier for this genre. In a case of First Installment Wins, Hybrid Theory is still seen by most fans and critics as Linkin Park's best album.

I tried so hard, and got so far! But in the tropes, it doesn't even matter!