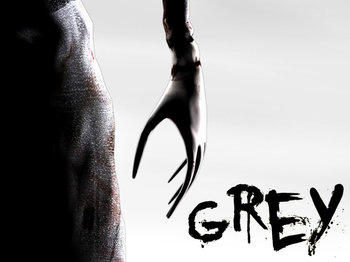 Grey is a Psychological Horror game created as a mod to Valve Software's popular Half-Life 2 video game by Deppresick Team. Grey acts as a total conversion mod to a certain extent, as much of the game's content is new rather than being lifted straight out of Half-Life 2 (aside from some sound effects and certain enemy behaviors).

Grey follows the titular protagonist after he wakes up from a strange hallucination he has in the bathroom of a bar he frequents, and his struggle with various supernatural forces he encounters while trying to make his way back home. Along the way he has to use various melee weapons and firearms to defeat the strange monsters that come after him.

Grey's biggest inspirations include Silent Hill, Jacob's Ladder, and Condemned: Criminal Origins, and due to the game's nature as a horror mod for a Half-Life game, it can even been seen as a companion title to other popular horror mods such as Cry of Fear and Afraid of Monsters.

Unrelated to the manga of the same name.