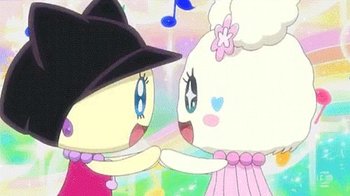 Given the anime's friendship focus, scenes like this were inevitable.
Advertisement: