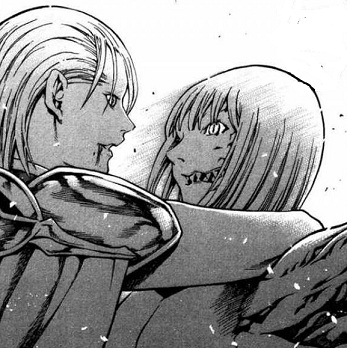 There's more than one way to thank someone for saving your life...
Advertisement:

Claymore is chock-full of kickass females, most of whom hide a tender side and at points the Les Yay levels rise to high heavens. Most of that is probably due to the fact that it's a series with an almost entirely female cast that spends a reasonable amount of time exploring the relationships between its characters. However, there have also been indications that Claymores are not interested in that kind of thing, perhaps, as a side effect of their mutation.

Think Nanoha with huge swords instead of magic. There is a reason some of the fans jokingly refer to the series as "Gaymoar".