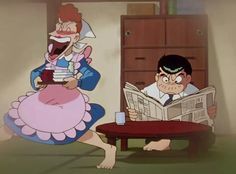 "Who was the husband and who was the wife?"
Advertisement: