Ho Yay / Seraph of the End 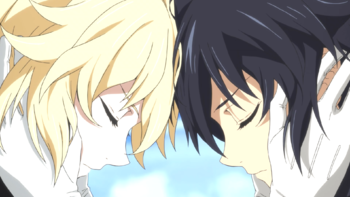 "You're the one I'm living for."
Let's not deny it, there's a reason Seraph of the End resonates well with the LGBT community. For example, Yuu and Guren practically have a harem of both MEN and WOMEN. The author has made it known in a Q&A that Yuu's "unexpected special skill" is to make others love him — outright implying Yuu's whole squad (male and female) has crushes on him, even using Kimizuki in the manga as an example.
Advertisement:
open/close all folders
Mika and Yuu
Ferid and Mika
Shinya and Guren

Shinya: So Guren, how do you like it? Is it good?
Guren: Shut up.
Shinya: Some things need to be put into words for them to be understood though, right Goshi?
Goshi: Right you are, Shinya-sama.
Shinya: I'll give you two choices. Do I look nice or do I look cool? Which one is it?
Goshi: C'mon Guren, say it already! That you're ready to fall in love with Shinya-sama in civilian clothes-
Guren: Hey Sayuri, make Goshi shut up.
Guren closed the door and went back to the living room, picking up Shinya’s phone. When he switched on the phone, there was no passcode required. What appeared before him was an unsent SMS that read,
‘Oh my, checking out another’s phone without permission, what a perverted Guren ( ͡° ͜ʖ ͡°)’ (note: Shinya really used this emoticon here)
“That bastard still has time for emoticons.” -Guren
Shinya (to Guren): Under such circumstances, driving (a motorbike) without a license won’t make any difference. But if we slow down now, we’ll be very obvious right? With you helmetless and hugging me this tightly coupled with the fact that we’re both guys, what will this look like huh?
Guren: Shut up and slow down
Shinya: But you probably can’t see the wound on your forehead right?
Guren ignored him and pressed down on the wound.
Shinya: Don’t be so rough. If you don’t treat it well, you’re going to have a scar there.
Guren: Oh really? Thanks for your care
Shinya: No one will want to marry you~
Guren: Ah—, I know I know. So noisy, shut up.
Shinya: Ah Haha
Shinya (to Guren): Ha, you better not think you can die so peacefully after sleeping with my fiancee. I will forcefully get you to safety. After that, I will not let anyone else kill you apart from me. If not, my entire life will become a failure.
Shinya: Clothes can be obtained from supermarkets located in the suburbs. After that would it be alright if we spend the night at a love hotel?
Guren nodded.
In this time, he (Guren) had been wrapped with chains along with Shinya, the two of them tightly pressed together. Goshi and Mito had also been there, watching with moist eyes like idiots.
Shinya (to Guren over the phone): Alright. Then we’ll talk when we meet. I’ll head to your house tonight.
Shinya (to Guren): But despite all things said, you’re still cute in some ways, so we’ve also become wanting to help you.