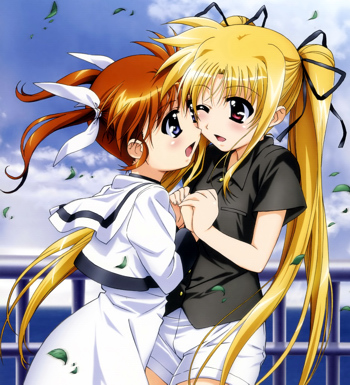 They are best friends. Yes...

Listing all the Les Yay in Lyrical Nanoha is an exercise in futility as it will involve practically every character from the main leads to Those Two Girls. If you want to save time, let's just say there are only four straight couples that have any canon basis - Chrono/Amy, Erio/Caro, Griffith/Lucino and Thoma/Lily in Force. note Just to show you how little the Nanohaverse cares for heterosexuality, the first developed entirely offscreen, and after the characters are Put on a Bus, the second pairing has a combined age of about 20 and may be Like Brother and Sister depending on who you ask, both parties in the third never advance above the role of minor supporting character, and the fourth, like the work it belongs to gets hit with so much Fanon Discontinuity it may as well not exist in the eyes of the fandom. Just to add to this, only the first is official...the rest are just heavily Ship Teased. Het is definitely Ew in Nanoha, indeed.

Main canon
Magical Girl Lyrical Nanoha INNOCENT/INNOCENTS
While the main continuity kept most of the Les Yay implied, then came INNOCENT, which being a promotional vehicle for a mobile phone Card Battle Game and a Lighter and Softer Alternate Universe to boot, decided to just ditch the subtlety altogether. Hence we got: