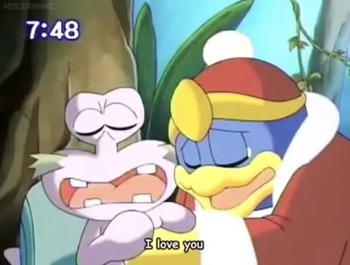 Yes, this is an actual moment from the show. (The original Japanese version, that is.)

For a kid's show starring the adorable and kid-friendly Kirby, there are quite a few moments where certain characters seem to be interested in the same sex in more than a friendly way, sometimes bordering on Ship Tease. King Dedede and Escargoon are notorious for this, but there are a few other examples as well.

The 4Kids dub removed a lot of gay subtext, but hints of it still tend to linger.

open/close all folders
King Dedede and Escargoon
Other