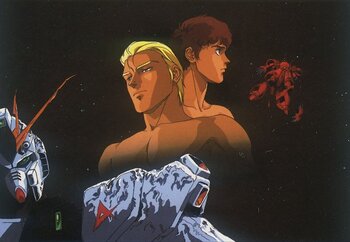 "Don't interfere in a duel between two men!"
"I thought it would be good if, maybe, I could highlight the sensuous elements… to the point that you’d think, “Could Char and Amuro be gay?” To me, fiction writing is, more than anything… like I just said, about conveying that sensuality, having the audience pick up on it…if they can’t, it’s no good."
Series creator Yoshiyuki Tomino on Char's Counterattack

Ho Yay seems to be par for the course for Sunrise-produced mecha anime...especially its Flagship Franchise, Gundam.