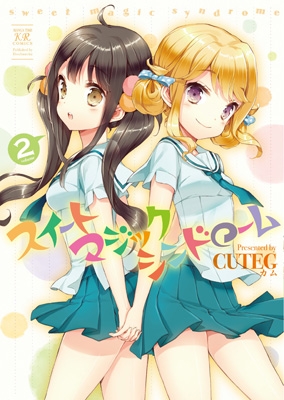 Amako is a young girl who has a great love of sweets. Due to her father's job, she had to move many times during her childhood, which prevented her from making close friends. Now she's 15 and starting high school, and it looks like she'll finally be able to have a normal school life! She intends to join the tea ceremony club, but it's going to be abolished this year, due to the lack of members.

All seems lost, when a strange young girl named Pudding appears out of a pudding cup! She says she's run away from her home, in the Kingdom of Sweets, and she agrees to be in Amako's club in exchange for a place to stay. Soon, Pudding's sisters, Cream and Chocolate, arrive to bring her home, but they find that Pudding's way home is lost! Will Pudding be stuck in Amako's world permanently? This 4-koma features Pudding, Amako, and other visitors from the Kingdom of Sweets, as they enjoy school life and tasty snacks together.

Sweet Magic Syndrome is a 4-koma manga by CUTEG that was published in Manga Time Kirara Miracle! from 2011 to 2014, with 41 chapters compiled into three volumes.