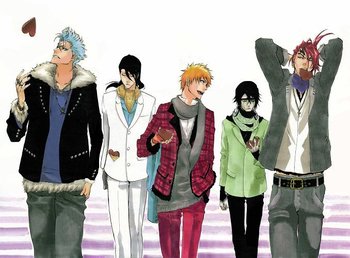 "It's like Kubo based Renji's pose off of an underwear model."
"At this point it is clear Bleach is about fashion models pretending to be shinigami at war."

of his current and former rivals, starting with Ishida, and all the way up to Aizen (see chapter 388 below).
Strawberry/Other Friends
Advertisement:
Yoruichi/Sui-Feng
Y-Y-Yoruichi-sama!
Ikkaku/Yumichika
Shinigami/Zanpakuto
How 'bout any of the same-gender shinigami/zanpakuto relationships? Weird case of Selfcest, true enough, but they're beings unto themselves - people in their own right — just spawned from, and based on somebody elses' consciousness.
Masters/Subordinates
Rukia/Orihime
Kyouraku/Ukitake
Hush, everyone! Father and Mother are talking!
Other