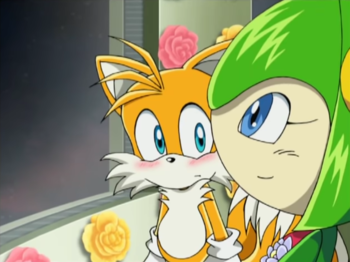 Tails: You're so beautiful.
Cosmo: Yes, the stars ARE beautiful!
Advertisement:

A standard romantic scenario. A couple (or two potential romantic partners) are gazing out at some sort of scenery, like a wide landscape, a flower garden, the night sky. One of them (usually the female, if the couple is heterosexual) is enthralled by the view and comments about it. The other one (usually the male) might hum sort of affirmation, but he's not really looking out at it like she is. Instead, he's gazing at her, implying that she's more captivating as whatever they're looking at.

One common variant is for the girl to be unaware of his feelings for her and missing his gaze as part of that, making his stare a Longing Look.

A more innocent version of All Men Are Perverts. Compare Distracted by the Sexy.